Ferraloro Energia & Costruzioni is born from the passion and tenacity of Basilio Ferraloro, still at the helm of the company: it starts with the gavetta, little boy, doing the ferraiolo, in a Lombard construction company where it grows professionally until it matures the decision to put itself in Only 18 years old.

Specializing in reinforced concrete structural works, professionalism and reliability are demonstrated right away from the acquisition of small and medium-sized commissions, to major resonance works such as construction of structures in c.a. Of the Luigi Ferraris stadium in Genoa, entrust it to the leading companies in the Ligurian and Italian construction market.

The transition from individual firm to enterprise is a natural consequence of the competence of Basilio Ferraloro, which in 1995 becomes a capital company.

With the entry into Salvatore Canto, Emanuele Ferraloro and Marina Ferraloro, the birth of Basilio Ferraloro & C. Srl.

The 90’s represent a turning point for the company that demonstrates all its ductility by acquiring new skills: from concrete reinforced concrete works it specializes in excavation and laying of telephone lines due to the development of communications with fiber optics, Sewers and aqueducts.

In the same years, the renovation of valuable villas and apartments subject to photographic reportage began by important architecture magazines, as well as the restoration of properties subject to constraints by the Superintendency of Genoa.

In 1997, the company saw Emanuele and Marina ‘s entry into operation, young, enterprising and with significant international experiences behind them.

The company, always focused on improvement, moves its skills on the “turnkey” by acquiring the skills for the complete management of the yard with the coordination of both internal and subcontracting electrical, plumbing, irrigation, painting and interior decorators.

This activity has seen the acquisition of additional expertise in the execution of underground garage and box with all the peculiarities, organizational and managerial, which this type of intervention requires, especially when implemented in existing urban contexts.

Energy reclamation represents a new turning point for the company which in 2007 expands its business by setting up a renewable energy company: Ferraloro Energia S.r.l. 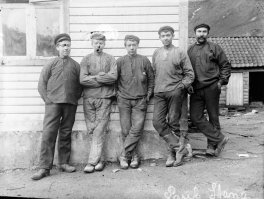